Eritrea is small, coastal country strategically located along the Red Sea in the Horn of Africa. It won independence from Ethiopia in 1993 after a 30-year war and has an estimated population of 3.5 million. It is divided into six administrative regions called ‘zobas’, which vary in size, population and socioeconomic conditions. Each zoba is further divided into sub-zoba (district), of which there are a total of 58. Its 3-tier health delivery system of primary, secondary and tertiary services is built around its administrative system. Eye care services are offered at the district hospitals, regional hospitals and at the national tertiary referral hospital.

The National Eyecare Strategic Plan 2010-2015, developed by the National Blindness Prevention Programme (NBPP) identified the following as some of the key constraints in the delivery of eye health services in the country;

In light of this, the NBPP’s subsequent strategic plans set out to address the identified challenges through the following objectives;

The Foundation began working in Eritrea in 2009 at the invitation of the National Blindness Prevention Programme (NBPP). The Eritrea National Eye Care Strategic Plan (2006-2010) had identified a gap in the provision of refractive errors services yet the MOH did not have the capacity to address this gap.

We were mandated to conduct a situational analysis of refractive errors services in the country, make recommendations and a strategic plan for developing refractive errors services. Based on the findings of the situational analysis, a three-pronged strategic approach that comprised human resources for eye health development, service development and research to address the problem was recommended and discussed with the key stakeholders. This led to the conceptualization of the Development of Refractive Errors Services in Eritrea (DRESE) programme. It was a partnership programme of the Eritrea Ministry of Health (MoH) through the NBPP, Asmara College of Health Sciences and the Foundation. The programme  objectives aligned with the government’s objectives and priorities and focused on supporting the Ministry of Health and the NBPP to address the constraints faced by the government in the delivery of refractive errors services such as the lack of qualified human resources; inadequate number of  eye units and lack of equipment through the following projects in the programme;

The Foundation conducted a Rapid Assessment of Uncorrected Refractive Errors (RARE) study in the country in 2010. Uncorrected refractive errors was identified as a significant cause of visual impairment. The study found the prevalence of refractive error in the 18 to 50-year-old population was 6.4% yet only 22.2% of these patients had spectacles. Age related poor vision, (presbyopia) among the 35-50-year olds was found to be at 32.9% with only 9.9% of these patients having spectacles to correct their vision[1]. Some of the constraints to correction of visual impairment included; lack of awareness of the problem; difficulty in accessing eye health services due to the long distances to travel to the nearest health facility, high costs of examination and spectacles etc. These findings provided the evidence needed for advocacy and further planning of our work in Eritrea.

The School of Optometry project was developed to support the NBPP address the lack of qualified human resources for eye health and training opportunities in the country. The two-year diploma course for Optometry Technicians began in 2010 at Asmara College of Health Sciences (ACHS) in partnership with the Ministry of Health and other government bodies. The diploma course was intended to be an immediate short-term solution to the dire need for refractive errors personnel in Eritrea, with the long-term plans of training degree qualified optometrists. A 5-year degree course was therefore started in 2013 and the diploma course was discontinued in 2016 after training 120 optometry technicians, all of whom were employed by the Ministry of Health and distributed across the country. The first 22 optometrists graduated in 2019 and they have also been employed by the Ministry of Health to provide more advanced eye care services beyond the scope of optometry technicians.

Following a government restructuring of Higher Education institutions, the optometry course was moved from Asmara College to Orotta College of Medicine and Health Sciences in 2018.

Although the training programme has been running for over 10 years now, Orotta College is a new partner institution hence the focus in the coming years will be to support the college in building its capacity to sustain the programme. Besides technical support, teaching and learning resources, availability of local faculty is critical in order to stop the current reliance on expatriate faculty. The Foundation will therefore support the college to develop local faculty. Candidates will be identified from the graduates of the course and supported through a qualification that will enable them to meet the minimum requirements to be lecturers at the college. They will also be supported through the Foundation’s Optometry Faculty Development Initiative Programme. Female candidates will specifically be encouraged to apply and prioritized as the Foundation’s strategic focus of supporting the advancement of women in their professional settings. 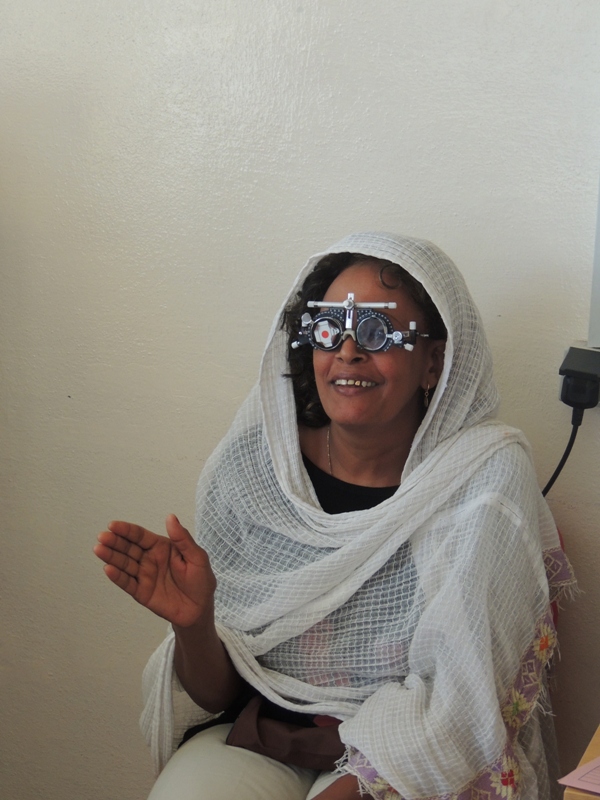 Delivery of quality eye care services requires eye units that are adequately equipped with the necessary equipment. It would be totally ineffectual to invest funds in the development of human resources (an optometry training programme) if at completion of training the graduates do not have the necessary eye care equipment or facilities at which they can offer their services. It is for this reason that the Foundation included in its strategy the setting up Vision Centres across the country in selected districts and zoba hospitals. To date the Foundation has set up 15 Vision Centres in various district and zoba hospitals. All the Vision Centres were equipped with appropriate equipment and spectacles to offer affordable quality services within a government system. It is in these Vision Centres that the Optometry Technicians and optometrists have been deployed by the MOH.

Further discussions will be held with the MOH to further plan how more Vision Centres can be set up to enable degree qualified optometrists to provide more advanced services beyond those provided by the Optometry Technicians. This will in effect establish a referral pathway for refractive errors services and further strengthen the eye health system in the country.

The Government of the State of Eritrea ratified the Convention on the Elimination of all Forms of Discrimination against Women (CEDAW) in 1995 and has since enacted several policies that support gender equity and women empowerment.  For instance, the educational policy of Eritrea states that “sustainable socio-economic development cannot be realized without the full participation of women, which comprise half of the population.” The National Policy on Gender aims to create a society in Eritrea where girls and boys have equal opportunities, rights, benefits and obligations in all sectors and areas of life in a way that enables them to achieve sustainable livelihood.[i]

However, despite national policies, gender disparities persist and are mainly perpetuated by cultural norms and societal expectations. When the optometry training programme began at ACHS, we noticed that the admissions into the programme for the first two years were all male students. We also noticed there were several mature students (not straight from high school). We needed to understand this trend so we had a discussion with the then Head of Department under which the optometry programme was run. We learnt that admission to higher education in Eritrea was only permitted after one had completed the mandatory national service. The duration of this service varies. Even though college admission at this stage was open to all, very few women applied. Societal pressures and expectations for the women is to get married and start families of their own upon completion of their service. As a result, fewer women than men had the opportunity to further their education or register as mature students post the national service.

Together with the college we sort to rectify the situation. The college agreed to admit girls straight from school into the course. They would then do their national service upon completion of their studies. This strategy saw a gradual increase in the number of girls admitted into the programme. For instance, in 2019, the first Bachelor of Optometry graduates were 9 females and 13 males while those who completed the course and are now doing national service are 8 females and 6 males. These 14 will graduate in 2020. We are happy we had the discussions as more young women will now be able to compete on the same footing as their male counterparts.