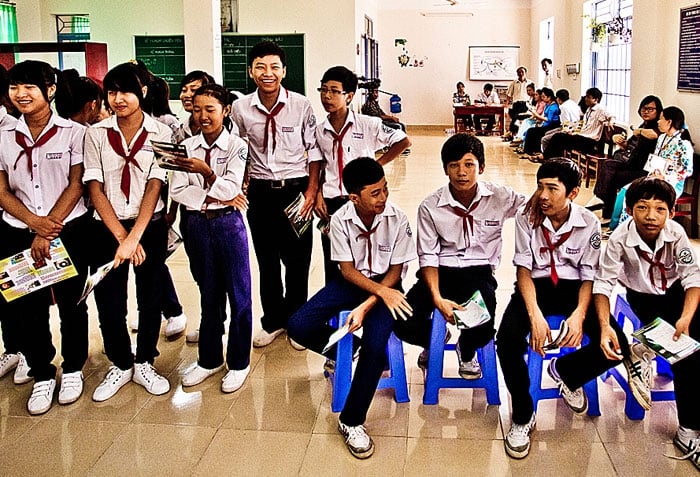 Health promotion in schools is an effective way to transfer knowledge to children and could potentially improve eye care outcomes, according to a recent study in Vietnam.

Researchers from Brien Holden Vision Institute and Ba Ria -Vung Tau Provincial Eye Centre in Vietnam, found that knowledge of childhood eye diseases and activities that could cause eye problems improved significantly, and an increased number of children having an eye examination and receiving spectacles, following health promotion activities at schools in the Bà Rịa-Vũng Tàu (BRVT) province.

Around two-thirds of children in BRVT with vision impairment have never received spectacles or do not wear them. Generally, school eye care programs have largely focused on vision screening, refractive error correction, spectacle wearing compliance and prevention of trachoma and Vitamin A deficiency. Yet it has been suggested that eye health ‘literacy’ is critical to ensuring ongoing utilisation of eye care services and spectacle wear compliance.

The researchers considered that health promotion may be an avenue to improving eye health knowledge, attitudes and practices among children, parents and teachers, but few studies have actually evaluated the effectiveness of this type of intervention. The study was conducted at five schools in BRVT, involving 300 children aged 12-15 years, and included activities such as oral presentations, posters, leaflets and stickers, training of teachers and school screenings.

It was found that the percentage of children with ‘correct’ knowledge and showing ‘positive’ attitudes to eye health increased by between 10-20% after the health promotion. This included more than 90% of children correctly reporting the common symptoms of eye problems. Awareness of red eye infections (including preventative strategies), refractive error and cataract increased by 12–24% and knowledge of eye trauma (foreign object injury) increased three-fold. Uptake of eye examinations increased from 63.3% prior to health promotion to 84.7% afterwards.

The intervention did fail to induce positive change in some areas, however, such as:

•    regularity of spectacle wear
•    knowledge of squint or night blindness
•    knowledge informed by traditional beliefs and myths
•    attitudes to eating Vitamin A rich food and personal hygiene such as hand and face washing.

Notwithstanding the above limitations, this is the first questionnaire to assess children’s knowledge, attitude and practices in the area of eye health, and does provide strong evidence that a health promotion initiative is effective in improving eye health literacy in children. It should be a valuable reference for agencies planning eye health initiatives for children and as an advocacy tool for those working in the sector.

The study was conducted as a part of the Vietnam Australia Vision Support Programme financially supported by an Avoidable Blindness Initiative grant through the Department of Foreign Affairs and Trade, Australian Government.